Warning: Trying to access array offset on value of type bool in /home/jdeeze/thefactninja.com/wp-content/plugins/current-age/currentage.php on line 165
 23 Starbucks Facts That I Bet You Didn't Know Skip to content 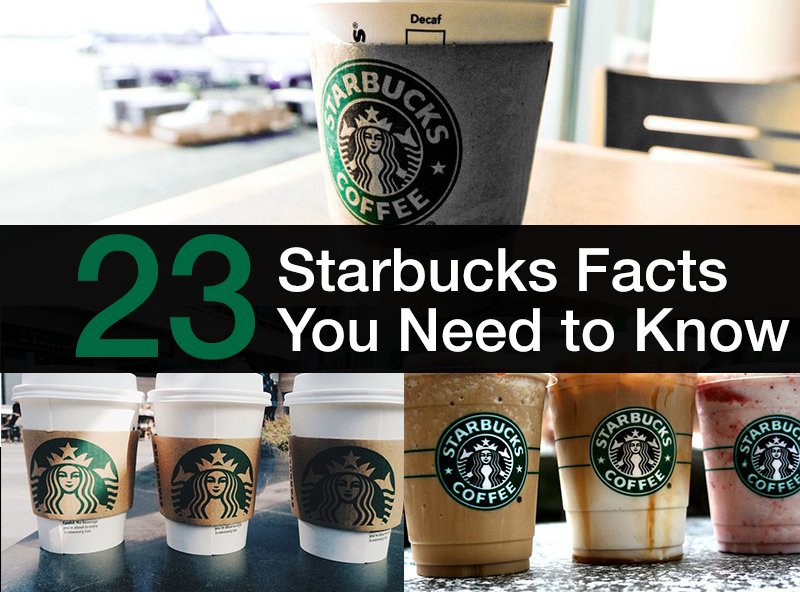 Starbucks is the world’s #1 coffee retailer and there is just something about their product that people just can’t seem to get enough of.Wherever you are, you can find a Starbucks and they have made such a massive impact on popular culture.

If you love Starbucks, then you are going to want to keep reading, as below I will highlight 23 interesting, crazy and wild facts about this coffee company.

1. Starbucks is a Global Brand

Starbucks is the largest coffehouse company in the world. They have over 22,000 stores globally. Outside of the United States, the countries with the most stores are China, Canada, Japan and the United Kingdom.

2. Starbucks Was Started by 2 Teachers & a Writer 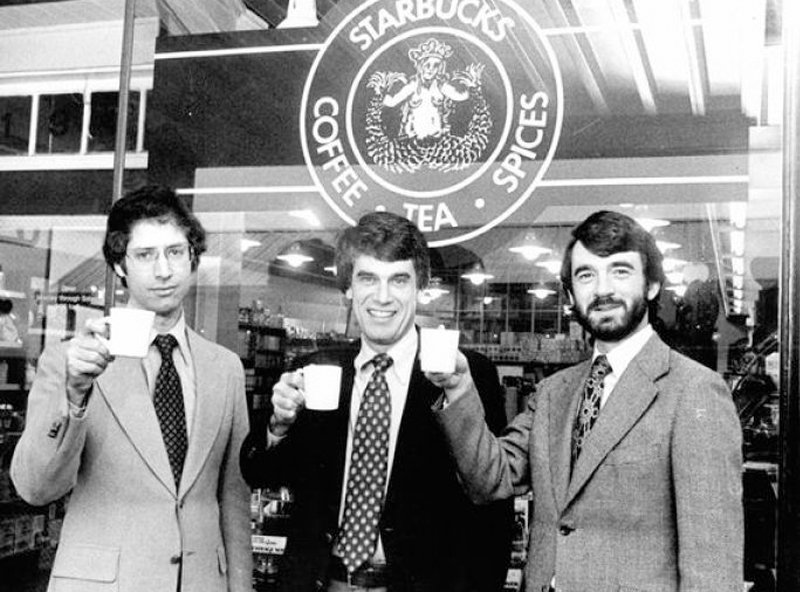 The first Starbucks opened in Seattle, Washington, on March 30, 1971. The three partners all met each other while they were students at the University of San Francisco. Jerry Baldwin was an English Teacher, Zev Siegl was a history teach and Gordon Bowker was a writer. 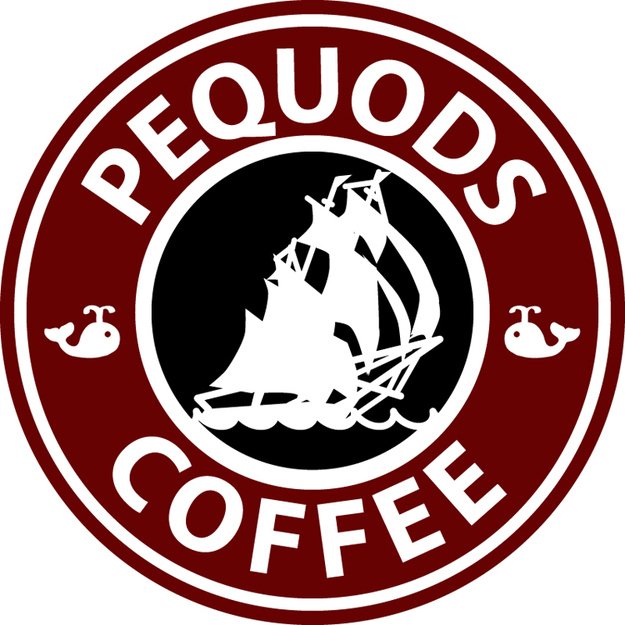 The Starbucks that we all know and love was actually not the original name of the company. The founders wanted to call it Pequod. Pequod was the name of the whaling ship from the book Moby Dick. The name did not sit well with some of the co-founders and so they rejected it. They all came to a decision that it would be named after the chief mate on the Pequod, Starbuck.

4. The First Starbucks Logo was Risque

With company now using the name Starbucks, the  founders felt that their logo should keep in line in with the same maritime theme. They decided that the logo should have the look of a siren, a bare breasted mermaid that

from a 16th century Nordic woodcut. This siren was a mermaid that was bare-breasted and had two tails. Over the years the company decided to tone down the raunchiness factor and the logo has evolved into what we know and love today.

5. TWO NEW STARBUCKS HAVE OPENED EVERY DAY FOR THE LAST 25 YEARS (ON AVERAGE)

It really seems that there is a Starbucks on every street corner. The reason for this is that there are massive numbers of stores spread out in the United States and also globally. If you look back to 1986, there were only six stores  and they were all found in Seattle. Now there are over 23,000 stores and if you do a quick average, you would see that Starbucks has opened on average 2 stores a day over the past 25 years. 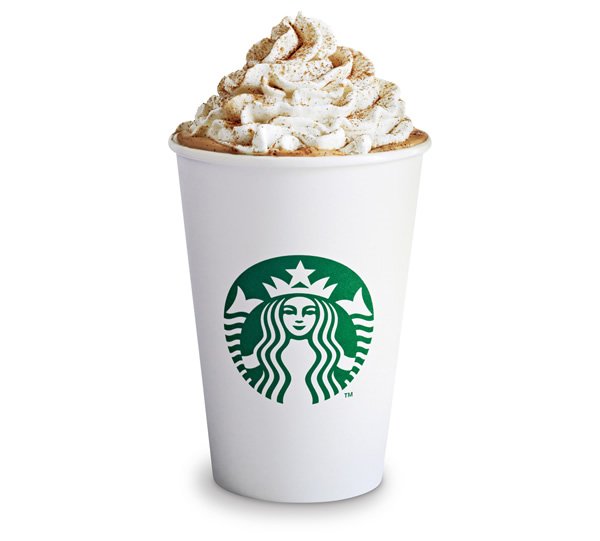 The Pumpkin Spice Latte is by far one of Starbucks most popular drink; with 200 million sold. However,it almost did not make cut. A few years ago Starbucks was looking to introduce a seasonal drink and the Pumpkin Spice Latte was one of the finalists,  among 20 other drink options. The pumpkin flavored creation did not make a big impression during taste tests, especially when it was going up against flavor heavyweights such as chocolate caramel and cinnamon spice. Despite the lukewarm response, the research and development team felt that something was there and stuck with. From that day, the rest is history.

7. The Pumpkin Spice Latte Had No Pumpkin In It (Even Though It Will Now)

The popularity of the Pumpkin Spice Latte is undeniable, but did you know that it did not contain an ounce of pumpkin anything? In 2014 a food blogger exposed what’s really in the beloved drink and it was a safe to say that people were outraged. With a firestorm brewing, Starbucks made it be known that the Pumpkin Spice Latte would be made with real pumpkin.

After hearing from customers and partners about ingredients, we took another look at this beverage and why we created it so many years ago. It was simple —espresso, perfectly steamed milk, warm fall spices with delicious flavor of pumpkin pie that reminds you of the cool, crisp days of autumn. So, with that great taste you know and love, the PSL returns this fall, and this time it will be made with real pumpkin and without caramel coloring.

8. You Would be Surprised at How Many Cups The Company Uses

In all of their global operations, Starbucks uses over 4 million cups a year. 4 million is a lot of coffee and also a lot of waste and Starbucks knows this. They have implemented a variety of recycling projects and they are also focused on reducing waste.

9. Santa Fe Springs, California has the Highest Concentration of Starbucks Stores in the World

If you live in Santa Fe Springs in California, you do not have to worry about finding a Starbucks, as there are about 560 locations in the city’s 25-mile radius. With that much density, it works out to be one Starbucks for about every 29 of the city’s 16,223 residents. 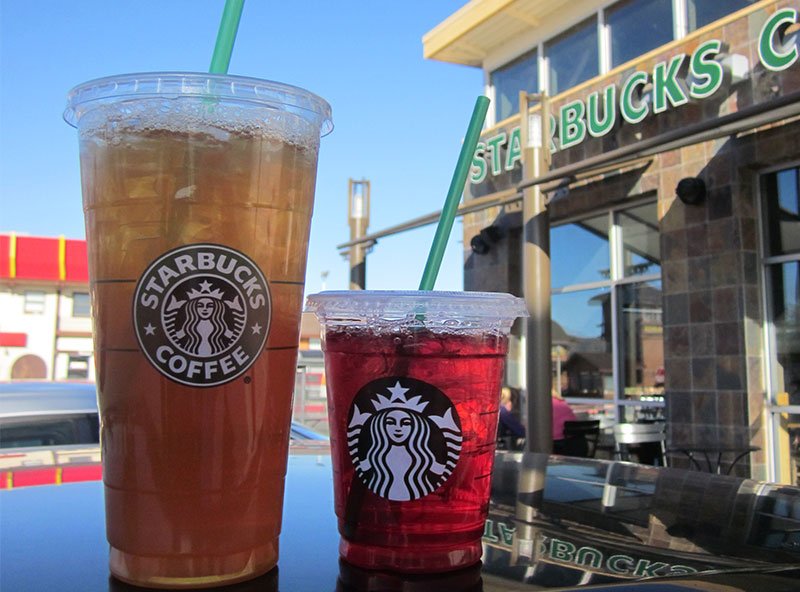 The picture says it all,  the Trenta size at Starbucks is MASSIVE.  This ginormous drink holds about 30.9 ounces, which is slightly a bit more than what the average human stomach can hold (30.4 fluid ounces).

11. A Grande Sized Coffee Contains 4 Times More Caffeine Than a Can of  Red Bull 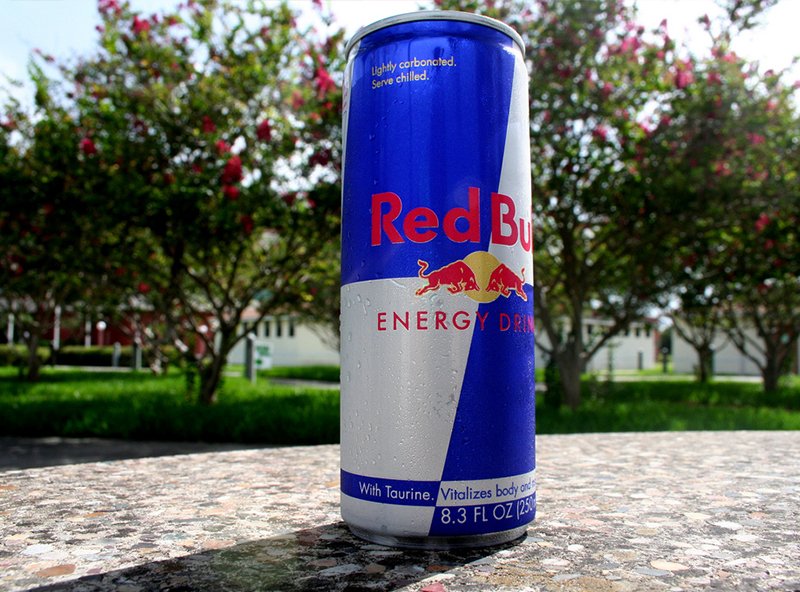 Red Bull prides itself that it gives you an instant boost of energy thanks to the amount of caffeine in it. If you really want a caffeine jolt, then you need get  a Grande cup of Starbucks coffee. One Grande  packs 4 times more caffeine than what you find in a Red Bull can. The Grande has 330 mg of caffeine, while Red Bull has 80 mg.

12. There are Over 87,000 Different Drink Combinations at Starbucks 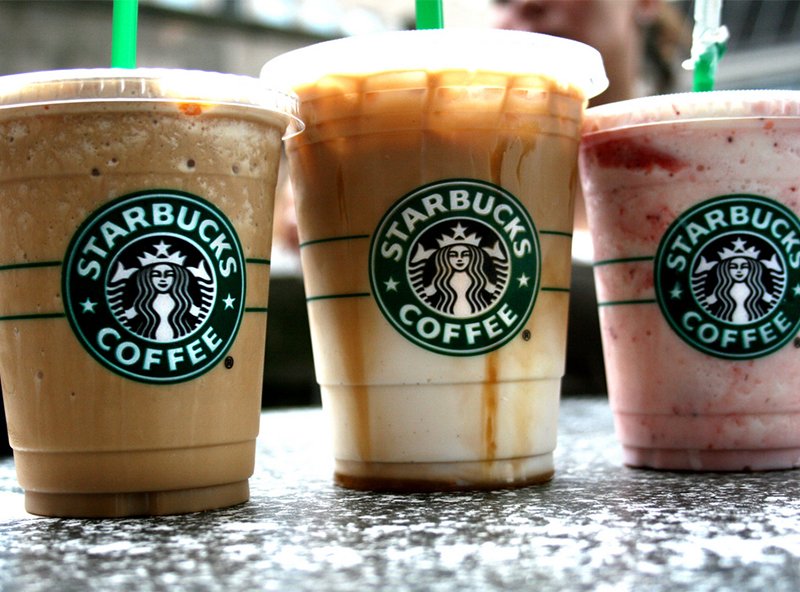 Starbucks has stated that coffee lovers can enjoy over 87,000 different drink combinations. This is all possible due to the countless mixing options that are available when ordering your drink of choice. If you feel like trying something new, you can always reference the Starbucks secret menu. You can get some cool ideas for drinks like Bubble Gum Frappuccino or Christmas in a Cup Latte.

13. There is a Starbucks Cup in Every Scene of Fight Club 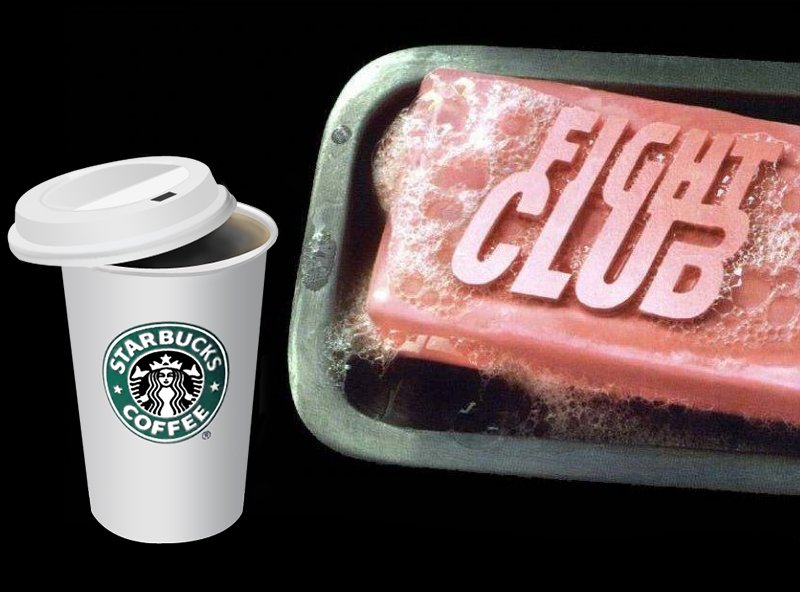 Love the movie Fight Club? Well I bet you didn’t know that there is a cup of Starbucks in every scene. David Fincher, the movies director, incorporated these easter eggs as a way to show his appreciation for his beloved coffeehouse.

The original Frappuccino beverage was developed, named, trademarked and sold by a Massachusetts coffee shop chain, The Coffee Connection. Starbucks acquired the coffee chain in 1994 and with that they gained the rights to use, make, market, and sell the Frappuccino beverage. The Frappuccino made it’s debut in 1995 and since 2012, Starbucks has recorded that the sales of the beverage are in excess of over $2 billion.

15. It’s The Most Popular Place for a First Date

According to a survey done of 200,000 people who using the dating app Clover, the #1 spot for first dates is Starbucks. Many people opt for Starbucks as a first time meeting place, as it is familiar, public and everyone kind of knows what to expect. Generally, if the date is a success, you can bet that there will be more couple coffee love in future.

When you take a look at the numbers, the average Starbucks customer visits the store 6 times per month. What really stands out is that there is a loyal 20% of customers who visit the stores up to 16 times per month.

The company uses over 93 million gallons of milk per year. If you were to take that amount of milk and pour it into an Olympic sized swimming pool, you would be able to fill 155 of them.

18. A Computer Glitch Resulted in Free Coffee for Some Customers 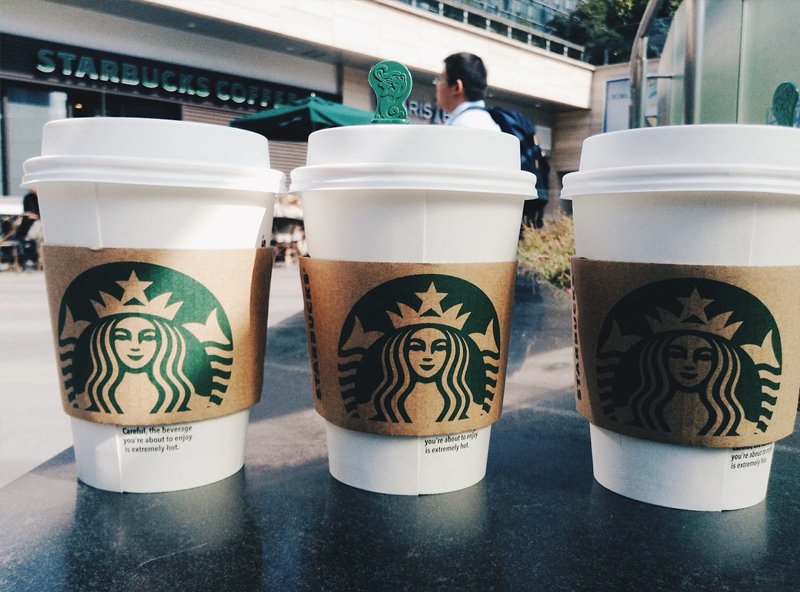 In April, 2015, a computer glitch affected Starbucks cash registers at over 7,000 stores in the United States and 1,000 in Canada. With Starbucks being the customer friendly company that it is, you had baristas giving out free drinks to customers who were unable to get their daily fix.

19. Starbucks is the First Brand to Reach 10 Million Likes on Facebook

Starbucks was the first brand to get 10 million Facebook likes. People love their coffee and it seems like that love came with them onto social media. Despite having a rabid fan base, the coffee company also has a really strong social media presence, that makes them one of the most distinguishable digital brands out there.

The 10-minute rule at Starbucks means that the stores will open 10 minutes before the posted opening time and also close 10 minutes after the posted closing time. This means that if your local store opens at 5 a.m and closes at 10 p.m., then the doors will be opened at 4:50 a.m. and close at 10:10 p.m.

21. There is a Company Mandate That Baristas are to Smile When Dealing With Customers

Have you ever wondered why Starbucks baristas are always so happy? Well one of the mandates from the company is that they have to smile when greeting or dealing with customers. Smiling is just one of many other instructions presented in the company’s manual, “The Green Apron Book”. Aside from smiling, baristas should also be welcoming, greet their customers, have a conversation and also get to know the customers names and the specific drinks that they like.

22. The Tables are Round for a Reason

When you go into one of the many Starbucks store, you are bound to see a variety of round tables. So what’s the reason for all the tables being circular? Round tables makes the experience feel more inviting and you will also feel at home when you’re there alone.

Starbucks spends a lot on health insurance, in fact, they spend around $300 million for their employees, that is more than what they actually spend on coffee beans. While shareholders wanted the company to cut expenses and highlighted the health insurance as a major cost, Howard  Schultz explained that he would not be doing away with employee insurance benefits and if they did not like the decision, they should sell the stock.