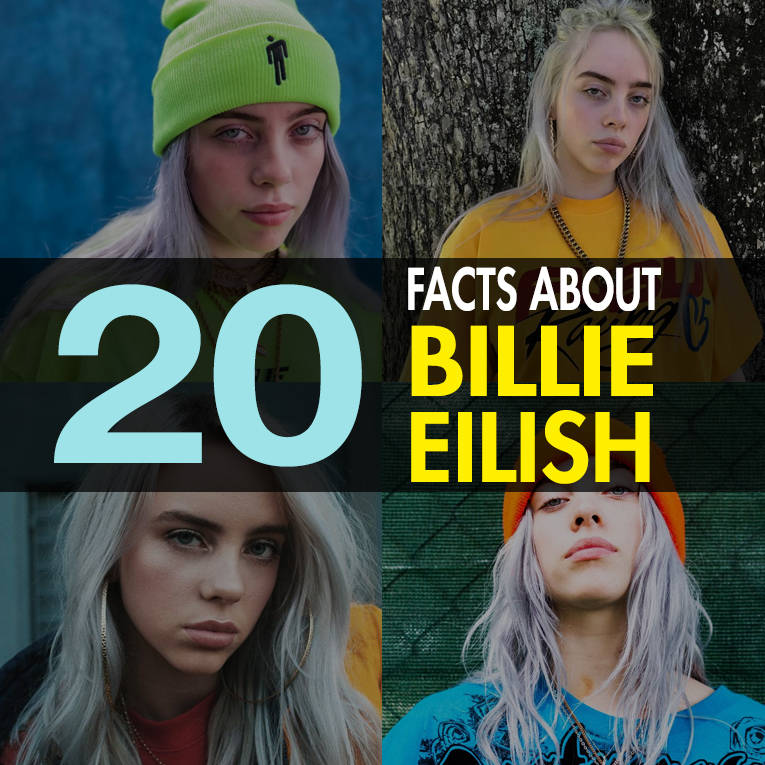 Billie Eilish is American pop singer who blasted on the scene for such songs like “Ocean Eyes” and “Fingers Crossed”. These tracks made her an immediate social media star and it also caught the attention of the music industry, with her landing a record deal with Interscope Records.

Below, we are going to highlight 20 pretty cool facts about Billie Eilish.

Birthday:  Billie Eillish’s age is 18. Her birthday is December 18, 2001. Her zodiac sign is Sagittarius.

Birthplace. She was born and raised Los Angeles, California.

Family life: She has an older brother, Finneas O’ Connell, who is in the band The Slightlys.

She Comes from a Musical Family. Speaking with Teen Vogue, Billie explained her musical background. “My whole family is really musical. My brother and my mom both write songs and my dad has always played the piano and ukulele.

Ocean Eyes. In 2015, one of Billie Eilish’s teachers asked herif she or her brother could write a song so that they could choreograph a dance to. She explained that “. I was like, ‘yes, that’s such a cool thing to do!’ Then, my brother came to me with “Ocean Eyes,” which he had originally written for his band. He told me he thought it would sound really good in my voice. He taught me the song and we sang it together along to his guitar and I loved it—it was stuck in me head for weeks. We kind of just decided that that was the song we were going to use for the dance.”

Which Artists Inspire Her. Billie has a ton of musical influences. She explained to Teen Vogue that she “I like Tyler the Creator a lot. He does anything he wants, really, and doesn’t care if it works out or not, which I totally, completely admire. I also really like Earl Sweatshirt and Drake and Big Sean. Childish Gambino is also an incredible lyricist. I don’t know how he does it. I love A$AP Rocky, Lana Del Rey, and Aurora”

First Song Was About Zombies. Billie started writing songs when she was 11 years old. It was a way for her to express her thoughts. In an interview with Harpers Bazaar, she explained that her first real composition was inspired by the popular zombie TV show, The Walking Dead.

“My first real song was about the zombie apocalypse actually, which is weird because it’s out and nobody knows that that’s what it’s about. It’s called ‘Fingers Crossed.’ I literally just watched The Walking Dead and I took little lines from it. Just watch all of The Walking Dead and you’ll find some things that are in my song and some episode titles that are in my song.

Dance. Billie has been dancing since she was 8. She was interested in contemporary dance and she would often be in the dance studio for up to 11 hours a week, practicing.

Dance Injury. In 2016, Billie Eilish suffered a dance injury when she was dancing with seniors in her dance class. Her bone had separated from her hip muscle after she was doing some hip-hop moves and her bone popped.

Acting. Billie performed in a couple plays growing up, however, she had a bad audition and from there she figured out that acting was not something when wanted to do.

Homeschooled. Billie Eilish’s along with her brother were both homeschooled.

Hair color: Her hair color is a shade of platinum blonde

Favorite Horror Movie. Billie Eilish has a thing for horror. She explained that her favorite horror movie is The Babadook.

Social Media. While Billie Eilish has an insane following on social media, she actually has a love/hate relationship with the platform.  She explained her feelings in an interview with Harpers Bazaar. ““I love it and I hate it. Social media can ruin something. It can completely ruin a relationship, a friendship, yourself. It can ruin how you feel or how you feel like you look. I feel like social media is insanely dangerous.”

18 thoughts on “20 Popified Billie Eilish Facts Every Fan Should Check Out!”